Okay, the Advent Calendar is swerving madly all over the Star Wars world by giving us another build, like yesterday, that isn't from any movies.

Day 4 sees a Republic Fighter Tank as I was pretty sure was seen in Episode III, but according to the Star Wars wiki page, it's only showed up in games, books, and animated shows.

It's perhaps as good a model as one can expect given the 23 or so pieces in it.

LEGO released a large build of this last year, and I always thought it looked pretty good, but not something I wanted, so I don't have one. 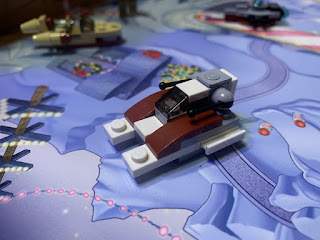 And it came with a spare turret, which are good to have around as extras to spice up other models that could use an antenna, or a laser cannon, or a bzzzzt thing.

Please speak your truth in your comments, whatever it is, so long as you do so with integrity and honesty to yourself and your position, no matter how much you disagree with me or another poster. But also be peaceful and respectful or your comment will be deleted. Insulting and shouting is not dialogue, it's just shouting and insulting.

“Don’t Do Something, Stand There And Be Silent. And Listen.” - Sermon from Feb 7, 2016, Transfiguration Sunday

“Don’t Do Something, Stand There And Be Silent. And Listen.” Sermon, Year C, Epiphany 5 Transfiguration, February 7, 2016 Plymouth United ...

Bonnhoeffer Never Had a Word Cloud